Green Party of Aotearoa New Zealand Co-Leader, James Shaw is visiting London this month, whilst in Europe for COP24 in Poland.

Come down and touch base with what’s going on in Aotearoa, where James is also New Zealand’s Minister for Climate Change, Minister of Statistics, and Associate Minister of Finance.

Grab your morning coffee (and maybe a bite to eat!) with James, chat about climate change, connect with some local kiwis, share your thoughts on the issues we are facing and hear about how things are progressing back home. Even if you can only pop in for 5 minutes on your way to work, we’d love to have you!

Location to be announced (central London somewhere) shortly. Check in to the Facebook event for all the latest. 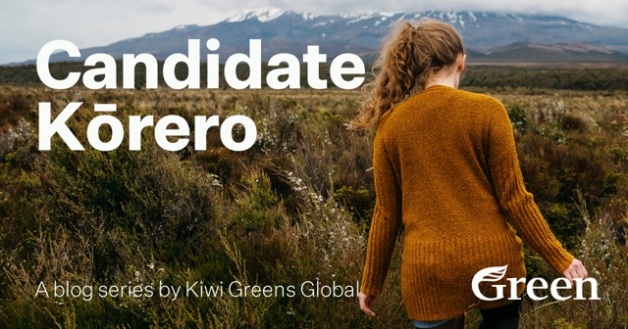 In the run-up to the NZ election, we are profiling our Green Party candidates and sharing their messages with Kiwis around the world. Today we have a message from Teanau Tuiono, candidate for Manurewa and number 16 on our list.

Current Role:
Political candidate number 16. I see this as an extension of the organising that I’ve been doing on social justice and environmental issues.

My Area Of Passion:
Indigenous Rights in the context of the environment

My Number One Goal in Government:
Sorting out climate change is up there but so is eliminating poverty. I am from the Te Uriroroi hapū so protecting the Poroti springs would also feature. I would like to support the revitalisation of Pasifika languages from the realm countries as well. So many issues! I can’t pick one. I will do them all!

My favourite thing about being a Kiwi:
There is a song by Trinity Roots called “Home, Land and Sea”, for me it encapsulates how I feel about Aotearoa on many levels. I like it because I feel that is neither nationalist or patriotic but instead asks us how we connect more deeply to this place we call home in more fundamental tones. I am definitely Iwi before I’m a Kiwi in that respect.

One lesson we can learn from overseas:
Most of the world speaks more than one language. Learn te reo Māori. It grounds us to the place and history of Aotearoa it is a part of who we are.

My favourite place overseas:
Paris, France – I lived there, I dig that city.

___
Click here to find out more on how to enrol and vote from overseas.
International voting is open until September 22 in person or September 23 (NZT) online.

One of the hottest conversation topics in pubs and cafes in 2016 is what the future holds for large cities.

The concept of the city is in a state of flux as rising house prices, public transport and sustainability combine to muddy the waters. We know things are changing but not necessarily how or why. There are fewer places in the world where this is more prevalent than London and New Zealand.

In an effort to make sense of this, Kiwi Greens UK teamed up with the New Zealand Planning Institute for the first of our “There and Here” events – a series bringing together experts from New Zealand and the UK to compare how the two societies tackle complex policy issues.

A wonderful crowd of around 40 people heard from two members of the London Branch of the New Zealand Planning Institute, who talked about what London and cities in NZ could learn from each other.

Take Auckland – 43,000 people per year move there and the council’s target is to build 39,000 homes in the next three years to help tackle “generation rent”.

London, by comparison, is growing by 135,000 each year and has designated Opportunity Areas for housing to help relieve the pressure on the average person to be able to rent, let alone buy.

Affordability was definitely a hot topic!

So what did our planners suggest?  It was put forward that for Auckland to remain a quality and sustainable city under this rapid growth, there’s a need to increase public and active transport along with a shift in mindset to accept denser living. In Auckland, 77 per cent of journeys are made by car, with public transport and cycling combining for just five per cent.

In contrast, more than half of Londoners use public transport, walking or bicycle to get about.

There was also much to say on the Christchurch rebuild, where the Government-led recovery is being transitioned over to local groups this year.  It drew comparisons with the regeneration of Battersea Power Station, as both are examples of areas that are in the process of transition.

There is a lot these cities can teach the other.  So if you’re reading this Sadiq Khan and Lianne Dalziel, take note:

Wei Yang who sponsored the event also gave her insights on city planning on an international level, having just returned from an international planning conference.  She questioned the absence of technology in planning when it pervades so many other industries to provide sustainable outcomes. She also championed green spaces as one of the most important facets in modern city planning.

A big thumbs up to KarmaCola for providing their fair trade fizz, and to Wei Yang & Partners for sponsoring the event so  thirsty Kiwis could catch up with old friends and new.   Thanks also to our trusty volunteer bakers who ensure our events are always well stocked with afghans, ANZAC biscuits and lamingtons!

We are hoping to hold another event at the end of summer to compare and contrast another topic that our two countries face.  Don’t miss out on our events – like our Facebook page, follow us on Twitter or subscribe to this blog to be kept in the loop.

On May 5, Londoners will vote for who they want to lead their city for the next four years.

This includes Mayor and members of the London Assembly.

Anyone who is over 18 and lives in London can vote provided they are either a) British b) An EU citizen or c) a Commonwealth citizen.

In order to vote, you must register by April 19. this is really easy to do – just visit the registration page here and complete your details. You may already be enrolled from previous elections but if you haven’t yet received a polling card or have recently changed address, it is a good idea to register again.

You should receive a polling card in the post before May 5 advising you of your nearest polling booth and it’s hours of operation.

If you are going to be out of town on May 5, or not able to vote in person for any reason, you can register to vote by post by visiting this website, downloading a postal vote application and sending it so it is received no later than April 19. When returning your postal ballot you must make sure it is returned and received by May 5.

Two elections are taking place on May 5. The first is for the Mayor of London. This is a four-year term and there are 12 candidates standing. You can read their mini-manifestos here.

Voting takes place using the supplementary vote system. You can choose a first and second preference on your ballot. Initially, only your first preference will be counted and if no candidate receives a 50% majority on the first round of voting, the top two candidates will move onto the second round where everyone else’s second preferences (as long as they are for one of the top two candidates) will be distributed. The best way to maximise your vote is to choose your favourite candidate on the first ballot and then your preference out of the Labour and Conservative candidates on the second ballot.

The first is for your local constituency representative – London has been broken down into 14 zones each with one direct elected member. The second vote is for your preferred party, with these votes proportionately allocated to fill the reaming 11 assembly seats. If you’re planning to vote strategically, it’s worth checking the previous results in your constituency and voting your preference of the top two parties. You should vote for whichever party best matches your priorities in the secondary list election as this is the most likely avenue for third parties to gain representation.

It’s easy to overlook these elections as they don’t receive much coverage in comparison to a national election, but the assembly is responsible for setting London’s strategic direction for the next four years and have a direct impact on public transport, conservation, housing, city planning and dozens of other areas which affect Londoners on a day-to-day basis. It’s your city so make sure you have your voice heard!