In the lead-up to the election on September 23, we’re profiling some of our widespread international volunteers and asking them to share why they’re voting Green in 2017. Today, meet Sarah – a new Kiwi mum living in London.

Rugby. Lord of the Rings. Lorde. Bungee jumping. Sunshine hours. Sheep. Rugby. Sometimes I want to burst into my own 2017 rendition of the Kiwi Burger song.  It’s become a cliche that when you tell someone you are from New Zealand, their eyes light up and they start listing the things they know (or think they know…) about Aotearoa. Flight of the Conchords famously did a bit on it (“there’s Vikings there, right?”) and now some people add Bret and Jermaine to the list of things to enthusiastically tell you about to prove they know what NZ is. (Though yes, there are still people who look confused and ask if New Zealand is in Europe.) 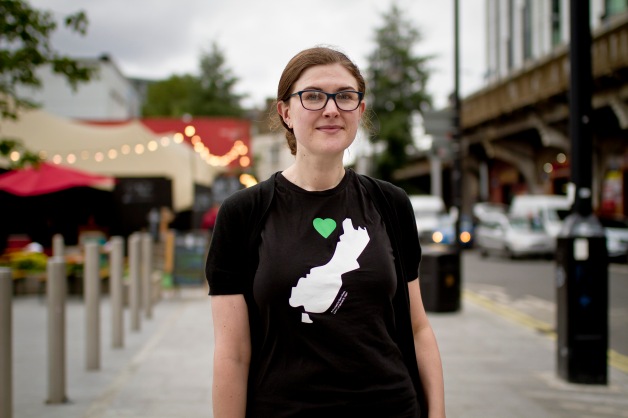 And everyone says “Oh I’d love to go there!”. People like me – young(ish), educated(ish), middle class globe-trotting lefty types, often have an idea that New Zealand is a utopia. Constant sunshine and social equality, office jobs swapped for days on the beach or in the bush. It’s the blank, sunny canvas on which they project their own dreams.

In my early days abroad I used to revel in this.  But the longer I had been away, the more it felt uncomfortable and like a half-truth.

While visiting European cities in weekend mini-breaks,  I would tell people I was a Kiwi and they’d marvel at how far I must have come. When I added that, actually, I lived in London they would look a little cheated. For a brief time I didn’t have a New Zealand passport, and started telling people I was British. It felt odd. A convenient half-lie to get out of unwanted chat. The “oh, ok” non-reaction was strange. I wasn’t used to not being special!

But it wasn’t just my geographical reality that made me uncomfortable about the universal gushing about NZ. It was a feeling that the world had believed the hype. The 100% Pure marketing had got to them. All the post-Brexit “I’m moving to New Zealand!” types didn’t help.

New Zealand is a wonderful country. It is my country. But it is not perfect. Our child poverty, youth suicide rates and inequality continue to make headlines at home. Waiting lists for medical treatment make me ever more grateful for the NHS. The rivers we see in those “Pure” adverts would make you very sick if you swam in them. And the neoliberal agenda – tuition fees, cutting benefits, the dismantling of the welfare state and state housing – had taken hold back home (shortly…) before I was born. Kiwi experts were brought over to the UK to advise on implementing similar policies here.

We gave women the vote first. We had the world’s first transgender MP. We are proudly nuclear free. We have a lot to be proud of.  But we can’t rest on our laurels and expect the advertising industry to create the appearance of the sort of nation we want.

This will be my third election in the UK. I will go to New Zealand House on Haymarket, revel briefly in the accents, and give two ticks Green. One day I hope to move back to Aotearoa. In the meantime I will visit and show my daughter where I grew up, and I want her to be proud to say that she is part New Zealander.

Click here to find out more on how to enrol and vote from overseas.
Enrolment and International voting are now open until 22 September.